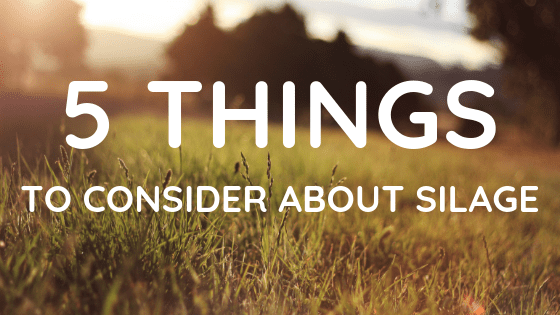 5 Things to Consider About Silage

It’s one of the most contentious issues in forage conservation, but generally, “how short should I chop it” is actually the wrong question. Like everything to do with ruminant nutrition, it’s actually far more complex than that. For instance, there’s a major difference by country/average weather, so in California, with dry very hot conditions, chop length is less important than it would be in, for example, Cumbria, where rainfall, humidity, and soil conditions are completely different. The key here is acidity – in the UK, wetter, younger cutting (especially the recently popular “multi-cut system”), creates a lower fibre/higher fermentability crop, which with very short chop has a huge surface area for microbial fermentation, both in the silage clamp and subsequently in the rumen. In the clamp, the effect – especially if exacerbated by what’s called “buffering capacity”, i.e. the ability to withstand pH change, often high in wet UK silages, particularly as a result of many years of slurry and Nitrogen excess – is to produce very high levels of acid by reduction of valuable sugars. That then creates a low pH silage, which in turn directly affects rumen pH and health.

In addition, short-chopping is not necessarily helpful to the ruminant for the creation of the rumen mat as rumination is dependent upon the ability to bring up and chew the fibrous content, encouraging healthy salivation (a buffer against acidity), and allowing a mechanical as well as microbial breakdown of the material at a controlled pace, to avoid any potential issues of either clinical, or sub-clinical, acidosis.

Key points: The answer is dependent on weather in the area and can affect pH and fermentability, therefore directly affecting rumen and health.

The often overlooked factor in creating “good silage” is the density; it’s actually not sufficient, after rolling by heavy machinery, to just throw a plastic sheet (even an “oxygen barrier” sheet) on top, and add a few tyres. By its very nature, conserved forage is “springy”, and silage making (which is literally pickling the crop in acid created by microbial action through conversion of its own carbohydrates, to lactic, acetic, and other Volatile Fatty Acids), is absolutely dependent upon the rapid creation of an anaerobic (oxygen free) environment. Thus, it really is as simple as the greater the compaction/weight/pressure on the top of the clamp, the more efficient the silage fermentation, and the lower the potential losses.

It is quite normal in UK silages to see losses of Dry Matter – again, a frequently misunderstood phenomenon in silage making, as the whole process involves a reduction of anything up to 40% of the harvested material, through various biological and management processes. What’s often not realised, is that the “Dry Matter loss” is actually the HIGH VALUE fraction, not the indigestible fibre, meaning the financial damage is in reality significantly greater. With silage in 2018 trading at £40.00 per tonne – or higher – it makes absolutely no sense to willingly tolerate losses in this way. A farmer with reasonably good management is still accepting that if he cuts 1,000 tonnes of grass, he is ending up with 750 Tonnes of lowered quality grass silage, and a loss of 250 Tonnes potential with a value of £ 10,000.

Key points: Losing high percentage of dry matter is not a normal phenomenon, and greater compaction/pressure onto the clamp lowers potential loss. The dry matter lost is often the high value matter, and a significant financial loss over time.

It’s hugely important when considering “where” and “how” to site a clamp/pit for forage conservation, that various factors are considered;

Key points: Access, height, weather, contamination and sliding all need to be considered.

“When to cut?” is a question to which the answer in the UK will always be “what’s the weather been like, and what’s the forecast?”. In theory, grass and other crops have an optimum time at which they achieve the maximum yield of nutrients, in the maximum potential weight. So it should be as easy as “I’ll cut my grass for first cut in the first week of May”.

Cows need fibre, so it is bizarre how we frequently see fabulous silage analysis, and then a TMR diet including 2 KGs of straw.

In a year in which Spring comes late, in which ground temperatures have been low, and in which rainfall has been significant, late applications of slurry and nitrogen, may well have created a potentially awful silage, in which the main acid is butyric, and in which toxic levels of protein by-products can be created. The harvesting date needs to be the right date for the season and the year, and that will vary. There are many factors in play, from grass types, to macro element status, to ground conditions, to contractor availability, to maturity, to planning for requirements (a light first cut, followed by a drought can be extremely costly)  etc.

Key points:  Again, it is very much weather dependent – it is worth asking your rep for advice on what is best for you.

Farmers are regularly subjected to “More milk/meat from forage!” propaganda from the industry. It’s always the same story – promising vastly improved profitability by reducing purchased feed, and creating magical forage systems which slash or even eliminate costs by generating far more of the farm’s nutrition from its own soil. Remember Dutch silage? Or the “New Zealand” system? Now it’s “Multi-Cut”. Do they work? Why yes, Dutch silage works very well – in Holland.

In the UK, we need “UK silage”, and although we can make huge improvements in what we harvest, how we harvest, and how we then feed that conserved forage, it begins in the soil, and ends on the supermarket shelf. Future profitability, and the “pay-back” for a different approach to silage-making, needs to be an improvement on what we in the UK do, not by attempting to adapt, or use, methods which are simply not appropriate.

Yes, it IS possible to get more milk from forage, and the rewards are potentially huge. If any UK farmer could gain 2 litres per cow per day from the farm’s own forage, the financial gain would be £20,000 p.a. per 100 cows.

Here’s an extract from one of our recent leaflets explaining forage loss in money terms: 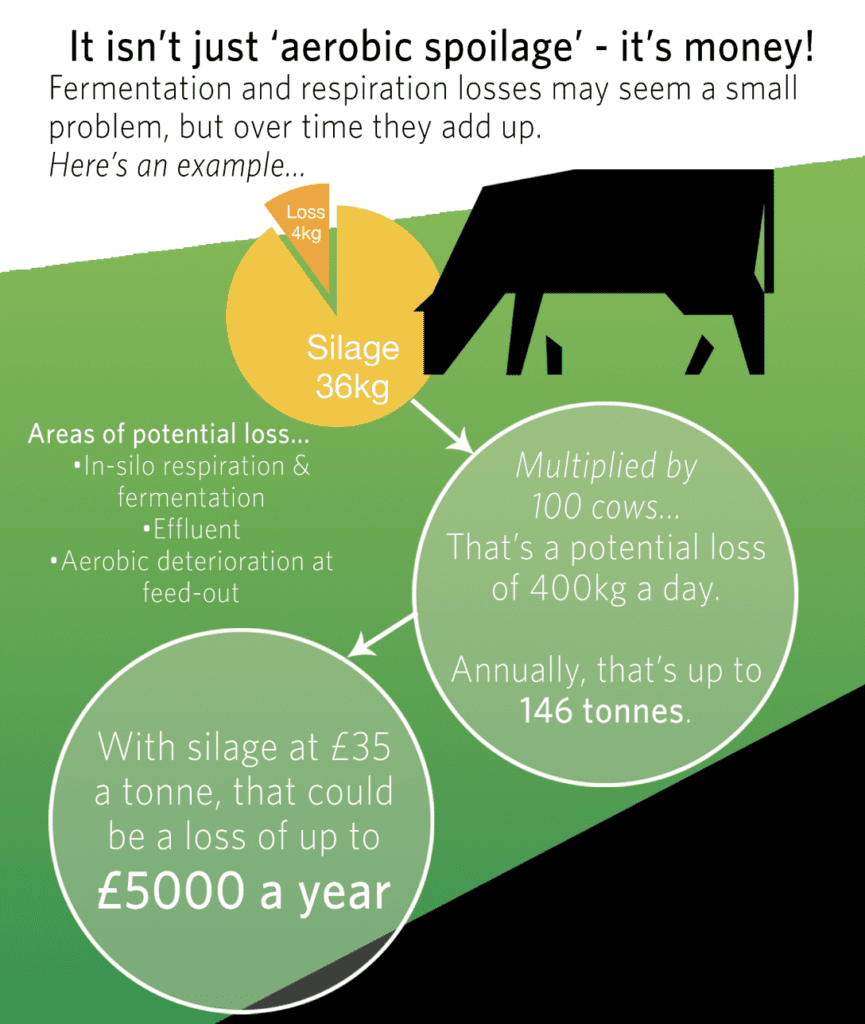 At Forage Technology, we pride ourselves on providing a service – not just a product. If you’re interested in finding the right silage additive for you then get in touch today.